Apes Hill Gets A Beach 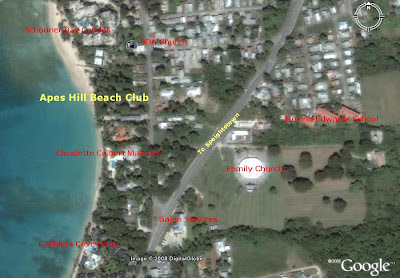 Click image to enlarge
Just two months after Royal Westmoreland opened it’s beach club on Mullins Beach (the old Mullins Beach Bar & Restaurant and the former Suga Suga Spa) the Apes Hill Club has joined them on the beach. The prestigious Polo - Golf - Tennis - Fitness Centre - Spa under construction at Apes Hill, St. James is setting up its beds and beach umbrellas on Goddings Bay off Queen Street in Speightstown, St. Peter less than a mile north of the Royal Westmoreland Beach Club at Mullins also in St. Peter. The signage on Queen Street in now up and Goddings Bay is destined to become a busier beach - not that it was not busy enough already with Cobbler’s Cove Hotel on its south end and Schooner Bay condos on its north end and several upmarket villas and condos in between them including the one previously owned by the late Hollywood actress, Claudette Colbert, who hosted President Ronald Reagan on his early 1980s visit to Barbados. Taxi and tour bus drivers still stop to point out the mansion to cruiseship visitors and other tourists.

One would have thought the Apes Hill Club would have been looking to share beach facilities with either the Port St. Charles Marina or the St. Peter’s Bay Condos under construction in Road View, St. Peter since they are/were associated with the same famous people. Why share when you can have your own! Especially so, when you are not hemmed in by the “highway” (Route 1) as is the case with the Royal Westmoreland Beach Club. Consequently, it makes for a much quieter and more secluded location for a beach club - not to mention the more space. The beach itself is on par with any on the west coast although much narrower now as a result of ongoing west coast beach erosion. Also, being in Speightstown it offers Apes Hill Club members and guests a lot more to do than just sitting around on the sand including visiting the recently opened museum at Arlington House a few steps away also on Queen Street.

So, the big question now is - will the other landlocked luxury resort under construction in the area, Apes Hill’s neighbor - Banyan Tree Golf Resort - at Black Bess, St. Peter, be joining the beach party in the near future. Its parent company - Bacassa Development Ltd. which has completed the landlocked Battaleys Mews near Mullins and are re-developing the also landlocked old Porters Sugar Factory in St. James for residential and commercial tourism related use - already owns Turtle Nest - the beach villa to the south of Royal Westmoreland Beach Club’s beach bar. It is currently still being rented as a beach villa but with Royal Westmoreland and now Apes Hill realizing that even golfers when they come to Barbados still want a beach the pressure must be on Bacassa to turn Turtle Nest into yet another west coast beach club for guests of landlocked resorts. Of course, that’s if turning Turtle Nest into a beach club wasn’t the original idea behind its purchase in the first place given the promotional video out there on the Internet which starts out selling the more than two miles inland Black Bess/Banyan Resort with a clip pointing to Mullins Beach and Turtle Nest circled in red. 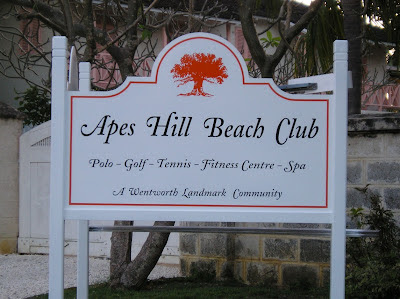