We have known for about a year (at least this blogger covered it last November) of the expansion plans of Royal Westmoreland to a 750-acre golf resort with the purchase of the adjoining Lancaster Plantation in St. James, Barbados, including adding another golf course and clubhouse, 250 more villas, an upscale shopping mall, and perhaps also a 5-star hotel. Well, a strange thing happened last Friday, July 25, 2008, the Lancashire Evening Post out of the city of Preston in England carried a story titled “Tycoon tees up plans to create golf resort” covering the Lancaster expansion plans of Royal Westmoreland as if they were all announced last week for the first time.

Don’t laugh yet! If we are charitable enough to say that the Lancashire Evening Post isn’t too quick, we would also have to say that the architects Royal Westmoreland have hired to design the Lancaster expansion aren’t too bright (well, at least their PR staff anyway). 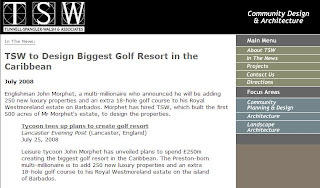 (click image to enlarge)
On their “In The News” page on their website (see screenshot above) they quoted verbatim from the article in the Lancashire Evening Post (Preston, England) but curiously cited the quote from the “Lancaster Evening Post (Lancaster, England)” [emphasis supplied]. Mercifully, the hyperlink takes the reader to the correct web address. Let’s all hope that the architects themselves do a better job on the Lancaster expansion in Barbados than their PR people did with "Lancashire" on the World Wide Web.

Now, this blogger realizes that this booboo may or may not be partially blamed on an "American" spell-checker, but still it is not like the PR people had more "big" news in July 2008 to report. One would have thought they had more than enough time to get their one and only news item for the entire month right? Laugh now!

Meanwhile, and I am not sure if this isn't another shenanigan but it is certainly no laughing matter if you are looking to get your hands on one of those fancy new villas or apartments at RW. According to their new interactive sales map of the estate be prepared to fork over between ½M - 7M USDs. Ouch!
Posted by KNRX at 6:08 AM