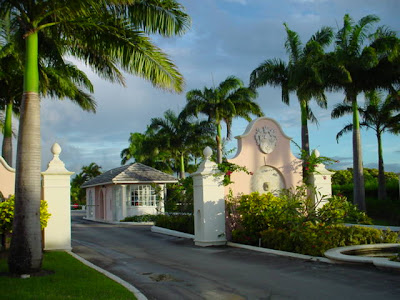 They are already infamous for denying entry even to the Royal Barbados Police Force investigating a case of domestic violence on the 750-acre luxury resort, but who-knew the rigid gate policy was also benefiting other west coast resorts:

"...Lloyd-Webber's first choice was in fact Royal Westmoreland, the stunning resort where Gary Lineker, Andrew Flintoff and, most recently, Wayne Rooney, have bought.

However, when he dropped in on the sales office unannounced last summer, security guards at the gatehouse turned him away. 'If you don't have an appointment we can't let you in,' they told him.

The irate impresario could barely believe his ears and headed straight for Clearwater Bay, where the guards were a bit less fussy..."

How stupid can these people be? Couldn't someone make a phone call to someone with half a brain saying - "we have Mr. Andrew Lloyd Webber of "Cats" and "Evita" fame at the gate and he is threatening to buy a villa much, much closer to the beach at the Four Seasons on Clearwater Bay - what shall we do?" Oh, well, what does this blogger know about these things?   Perhaps John Morphet is the one singing all the way to the bank:

And as for fortune and as for fame
I never invited them in
Though it seemed to the world
They were all I desired
They are illusions
They're not the solutions
They promise to be...

Don't cry for me Argentina