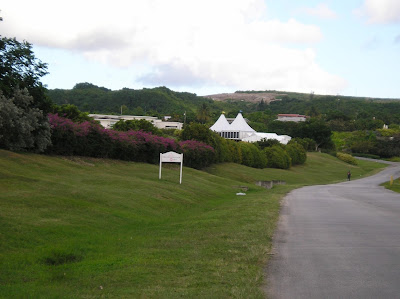 It came to light last week that Sandy Lane is putting its US $1 billion dollar villa development on hold. Oh, wait, this blog and the rest of Barbados thought that development was already on hold. What’s new here? The Nation newspaper not so subtly suggested that the delay was related to the uncertainty surrounding the continuity of the offending dump, Mangrove Landfill, upwind from the resort. Whereas that may be true, this blogger thinks that there is a lot more in the mortar than the pestle here.

Given the current world economic forecast Sandy Lane knows that now is probably not the best time to be building and hoping to sell speculative real estate even if the seller has the cachet of Sandy Lane. Although it is true that people who can afford to buy at the Sandy Lanes of this world probably are immune to the vicissitudes of the real estate and financial markets, it is also true that when banks are foreclosing on multi-billion dollar luxury condo/hotel projects like The Cosmopolitan in Las Vegas that they are probably also not in a hurry to extend financing for new projects anywhere else in the world. As the saying goes - when America sneezes the rest of the world catches pneumonia.

Sandy Lane could also be responding to the current uncertainty surrounding the new government in Barbados, and also not too subtly telegraphing the message - listen guys, hurry up and get your act together -we are talking billions of dollars in investment here. The recent ignominious about-turn of the new minister responsible for the environment on the question of the Greenland landfill, which supposedly is to replace the the already full and offending Mangrove landfill, at best did not inspire a lot of confidence in the new government even though it appears the matter is being resolved in Sandy Lane’s favor.

Mt. Stinkaroo a.k.a. Mangrove Landfill (the brown area in the picture above located above the new clubhouse and media tents pitched for the world golf championship event held at Sandy Lane in December of 2006) was around long before Sandy Lane bought its thousand acres of land and decided it wanted to turn a 9-hole/100 room hotel into a 45-hole golf and villa resort. With no viable alternative to Stinkaroo on the horizon and the environmentalists and NIMBYs blocking Greenland it is likely that they are going to be finding new ways to pack more stuff on top of Stinkaroo for the foreseeable future. As long as that continues to be the status quo you are not going to be able to sell anymore million dollar villas any time soon at Sandy Lane.
Posted by KNRX at 1:16 AM