Beach Widening To Start In Holetown

The Nation reported this week that work will start this month or next on an ambitious plan to widen the beach at Holetown a la what's currently underway between Rockley and Hastings on the South Coast. The Coastal Zone Management Unit which has oversight of the estimated US$2.75 M project which is already out to tender hopes to stabilize and widen the beach, and provide continuous public access between the defunct Regent Hotel and Discovery Bay Hotel. This would be achieved through:

Constructing a
new walkway and revetment from the beach at Discovery Bay (northern extreme of project site) to the north of recently sold Chefette Restaurant.
Constructing a new walkway protected by a stone revetment from the existing beach in front of Chefette going south to the north side of the beach at Vauxhall reef.
Building two headlands (one fronting the Regent Hotel and the other The Beach House restaurant).
Using 2500m3 of sand from the stockpile at the Bridgetown Harbour to nourish the site. 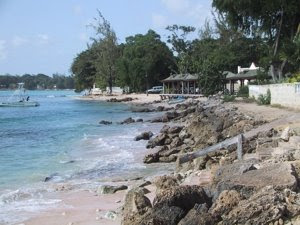 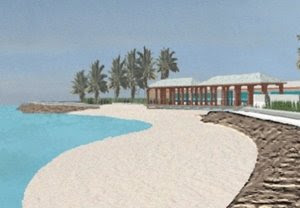 While this blog lauds this attempt to improve the beach amenity at Holetown (if done with care and all due diligence) for the benefit both locals and visitors, it is regrettable that it is coming at a time when almost all of the entire length of the scope of the project is being lined with condos for wealthy foreigners - residences that will be only used two or three weeks of the entire year.